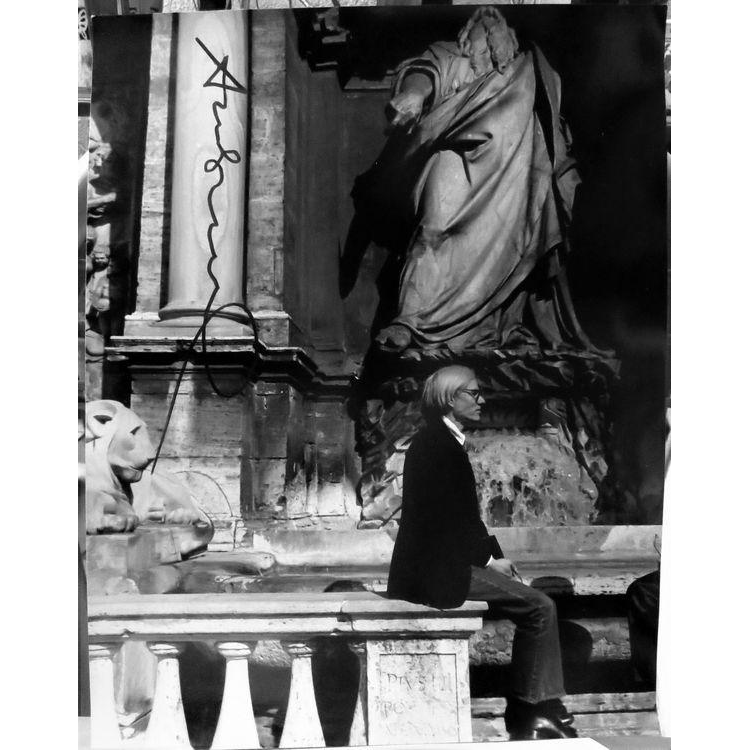 The photo is from 1977 and was made in Rome, Italy. According our
information Andy Warhol went there to meet Fellini.

Size: 23,9 x 30,5 cm (9,4 x 12 inches). The photo definitely has been
made by a professional photographer but it is not sure by whom. It sure
looks great when matted and framed.

Old Chinese photo from 1902. The photograph depicts a German soldier, fooling around with laughing Chinese children.

Old Chinese photo from 1902 or 1903. The photograph depicts 2 delinquents with “kong”. This kind of punishment should plunge others.

Desirable David Niven portrait-photo with dedication and signature.
The autograph comes in the original postal cover from 1974, sent from Chateau-d’Oex.

James David Graham Niven ( 1910 -1983), known as David Niven, was an English actor and novelist, best known for his roles as Phileas Fogg in Around the World in 80 Days and Sir Charles Litton, a.k.a. “the Phantom,” in The Pink Panther.

In 1967, he appeared as one of seven incarnations of “007” in the James Bond spoof Casino Royale. In fact, Niven had been Bond creator Ian Fleming’s first choice to play Bond in Dr. No. Casino Royale co-producer Charles K. Feldman said later that Fleming had written the book with Niven in mind, and therefore had sent a copy to Niven.

Niven was the only James Bond actor mentioned by name in the text of Fleming’s novels.

Wilhelm Furtwaengler (1886 -1954) was a German conductor and composer.

At his first concert, he led the Kaim Orchestra (now the Munich Philharmonic Orchestra) in Anton Bruckner’s Ninth Symphony. He subsequently held posts at Munich, Luebeck, Mannheim, Frankfurt, and Vienna, before securing a job at the Berlin Staatskapelle in 1920, and in 1922 at the Leipzig Gewandhaus Orchestra where he succeeded Arthur Nikisch. Later he became music director of the Vienna Philharmonic Orchestra, the Salzburg Festival and the Bayreuth Festival, which was regarded as the greatest post a conductor could hold in Germany at the time.

Towards the end of the war, under extreme pressure from the Nazi Party, Furtwaengler fled to Switzerland. It was during this troubled period that he composed what is largely considered his most significant work, the Symphony No. 2 in E minor.

His most famous role was that of The Tramp, which he first played in the Keystone comedy Kid Auto Races at Venice in 1914.