18 – 19th century sculpture of a bird-headed Buddhist god: Wooden Garuda with a layer of lacquer, gilded. 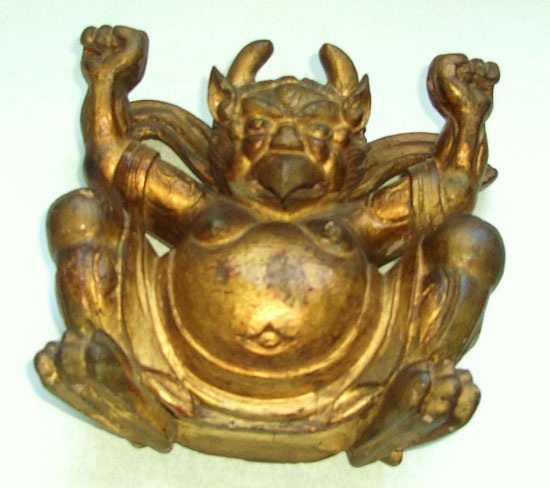 In Buddhism, the Garuda is said to be a huge bird, his wings spanning several miles! He is said to have amazing power, intelligence, strength and wisdom and can change to human form at will. There are some stories which even talk of Garuda kings having romantic dalliances with human women. The Buddha, in the Mahasamyatta Sutra, is shown as making peace, albeit temporarily, between the Nagas (serpents) and the Garudas.

The concept of Garuda is also seen in Indonesian, Thai, Japanese and Mongolian culture. While the Garuda is the national symbol of both Thailand and Indonesia, it is the symbol of Ulan Bator, the capital city of Mongolia.

Small Tibetan characters at the reverse

80 x 104 mm, slightly darkened along the margins, minor aging at upper middle part. Matted and framed it would come out very well.