Ca. 1910: Attractive, scarce, unusual Carnival Postcard. Most decorative lithographed postcard with a strange content: A Harlequin with sabre dominates the left side of the postcard. The right upper part shows a crowd in the street watching a burning house.

The inscription reads: “ 10,000 Gun Licenses. Prince Carnival is a humdinger this year „.

So what’s the story? Thieves stole 10.000 gun licenses from the magistrate in old Prague and set the house on fire afterwards. 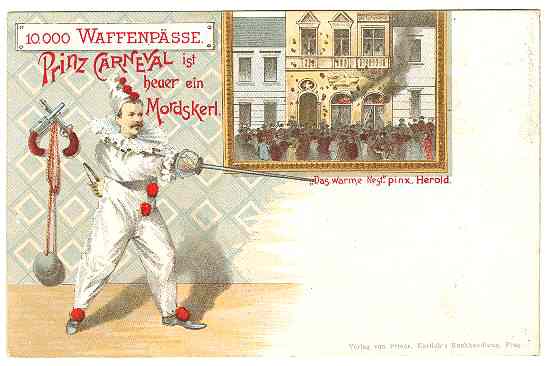 Red Cross, Portugal: Red Cross cover with a double imprinted stamp. Added is a sheet of an old stamp dealer, explaining the history of the stamp: ” These exceedingly rare stamps, there being but 50 of each used on cover in existence, …….”.

China, Ming Dynasty: Scarce wooden ritual object for Daoists practicing exorcism. The object is hollow, closed and filled with some tiny parts so it makes a rattling sound.
Delicately carved hard-wood with Zhong Kui, the legendary ghost expeller at front side and characters with spells at reverse and both sides.

Embossed Studio Name at the lower right corner. The edges have darkened as the photo was kept in a frame.

China, Qing Dynasty: Gilded wood carving with a rider (immortal) on a mythical creature, a Qilin, holding a big piece of gold.

Hand carved wood that has been gilded over red lacquer. Detailed work, strong facial expression of the rider.

Foot binding was a custom practiced on young girls and women for approximately one thousand years in China, beginning in the 10th century and ending in the first half of 20th century.

To enable the size of the feet to be reduced, the toes on each foot were curled under, then pressed with great force downwards and squeezed into the sole of the foot until the toes break.

This was all carried out with no pain relief, causing the girl to experience severe pain. The broken toes were then held tightly against the sole of the foot. The foot was then drawn down straight with the leg and the arch forcibly broken.

Interesting shape with one side heavily curled.