The Autograph comes with a Certificate of Authenticity. 4 x 6 inches, very fine condition. 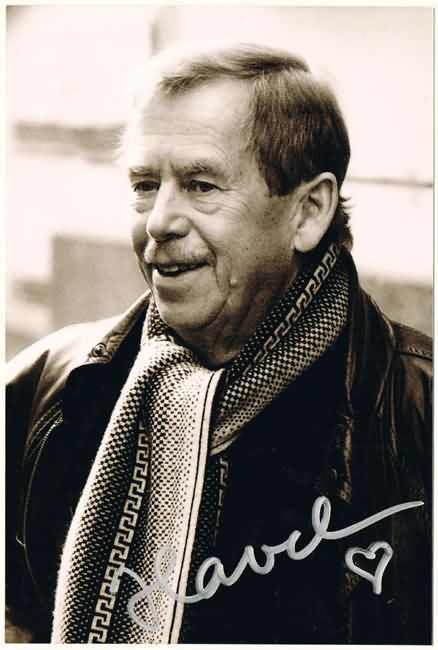 Vaclav Havel, born 1936 in Prague was always very close to the intellectual and artist community in Czechoslovakia.

As an outcome of the Second World War Czechoslovakia fell under Soviet Russian and Communist domination in 1948 with serious effects on Havel’s family. Vaclav Havel worked as a laboratory technician and took night classes to finish high school. As he grew into manhood he showed signs of dissent against the Czech Communist authorities’ ongoing suppression of artistic and literary freedoms.

Havel was somewhat involved in the Prague Spring of 1968, an episode where Czech intellectuals enthusiastically supported moves, then being sponsored by Alexander Dubcek, for a liberalizing reform of the Czech Communist system.

A Soviet invasion of August 1968 suppressed the Prague Spring. Havel protested with the result that the authorities banned his works. The authorities offered him several opportunities to leave the country but he declined as he had decided to remain in Czechoslovakia and work for change holding the view that ‘the solution of this human situation does not lie in leaving it.’

In 1977 he helped orchestrate and produce Charter 77, a document supported by hundreds of Czech intellectuals, that demanding that Czech citizens be afforded basic human rights such as had seemed to be promised in the Helsinki Agreements…….